The online version of the Memorial of the Deportation of the Jews of France consists of a free, bilingual website (French/English), with an interactive search engine. This tool enables to search by any combination of criteria among all fields. Based on the latest published Memorial (Serge Klarsfeld, 2012), its periodic updates offer new complements, corrections and references to other online resources. For more details, read below. 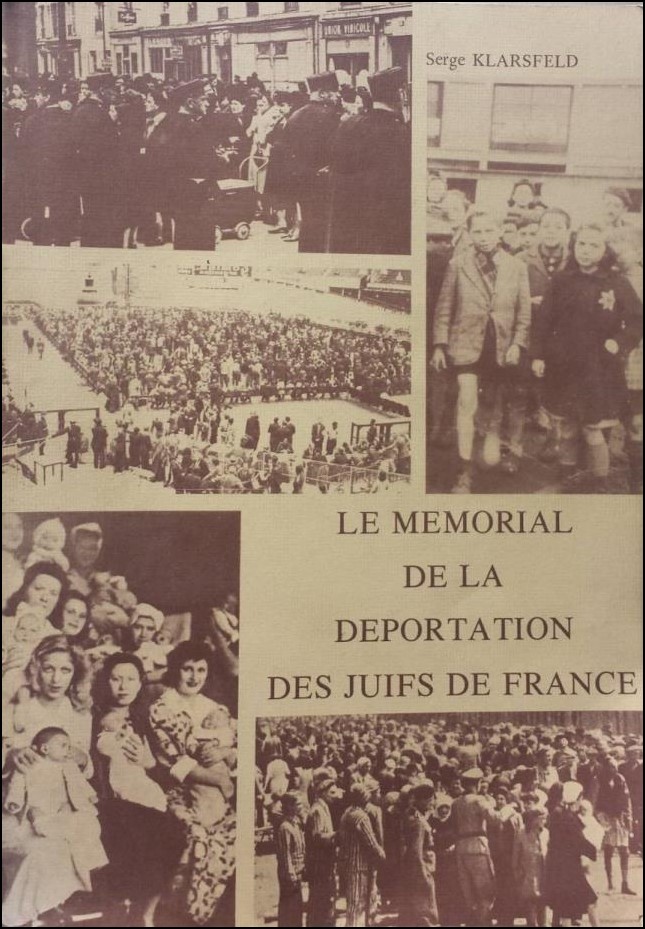 In the first edition of the Memorial to the Jews Deported from France (1978, english edition 1983), Serge Klarsfeld compiled the list of 76,000 Jews, men, women and children, deported from France, who were executed or died in the internment camps of France under the Nazi occupation and the Vichy regime. Convoy descriptions precede the nominal list of the deportees who compose it. Vladimir Jankélévitch welcomed this publication with these words:

"The Memorial of Serge Klarsfeld, perpetuating the memory of 75,000 Jewish deportees in France, is first of all due to the enormity of the work it represents and the ruthless, methodical, meticulous rigor that presided over its elaboration. (...) One can not conceive of a more atrocious and diabolical machinery dismantled in a more sober work. (...) The Memorial of Serge Klarsfeld brings out the night and the cloud by calling them by their name, the innumerable anonymous ghosts annihilated by their executioners. To name these pale shadows is to summon them to the light of day." (Le Nouvel Observateur, May 22, 1978) 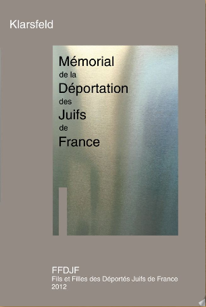 After 40 years of research and a series of intermediate versions, Serge Klarsfeld published the third edition of the Memorial to the Jews Deported from France (2012) in memory of the 76,000 deportees, the 3,000 dead in the camps in France and the thousand Jews executed during the Second World War. Many corrections have been made since the original 1978 version. This alphabetical version provides additional information for each victim, including the maiden name, the last address in France and the transit or internment camp.

Find here the translation of Serge Klarsfeld's original introduction to the 2012 Memorial.

The major goals of the online Memorial are as follows:

The database of the online Memorial is built from the 2012 edition of the Memorial; it also includes corrections made by Serge Klarsfeld since 2012. From there, I started editing.

I first did a systematic review of the data. The massive use of computer techniques has made it possible to detect and correct a small number of errors or inaccuracies and to standardize the results. For example, adding the year of birth to the age of the person at the time of their deportation, we should normally obtain a value between 1941 and 1945. Otherwise, there is a contradiction that must be resolved. I also corrected the minor errors that had crept into the addresses in France, street names, departments, birth dates, etc. I updated the names of the streets (when it was possible), the names of the communes of France and the departments.

Then I tried to specify the place of birth of the victims. The versions of the 1978 and 2012 Memorial generally provide the date and place of birth of each person, but without any other details. One of this version's objectives is to identify these places of birth, giving the current name of each locality, as well as the country and the department (in France) or the administrative region (outside France) where it is currently located.

This task is tricky for the following reasons:

In many cases, an investigation has been conducted to accurately determine the place of birth. This investigation, based on a series of [geographical, linguistic, administrative and logical] indicators, and correlated with complementary [memorial, onomastic and genealogical] sources led to the identification of places of birth. So we extended the original repository with direct references to these other data sources.

We added references to the online lists of persons posthumously declared as "died in deportation" by the Office National des Anciens Combattants et Victimes de Guerre (National Office for Veterans and Victims of War) administration. These lists, published by the Official Journal of the French Republic, provide details not in Klarsfeld Memorial, but they often contradict it : different spellings of first and last names, multiple first names, date, place and country of birth, maiden name, ... Unfortunately, these lists introduce many errors: notably, foreign names and places of birth abroad are severely distorted. This is why it was necessary either to "reinterpret" this information or to ignore it. I leave it to the reader to check them.

The database has also been enriched with links to other online sources, such as biographies, testimonies, metrical records, memorial records such as those from the Memorial of the Victims of Persecutions against Jews by the Nazi regime in Germany (Gedenkbuch), the Documentation Center for Resistance in Austria (Dokumentationsarchiv des österreichischen Widerstandes), the website of the Mémorial de la Shoah in Paris, the Pages of Testimony pages at Yad VaShem or the Jewish genealogy sites. All these sites are freely accessible but some of them may request pre-registration, login or other security procedures. The information provided by these other sources may sometimes contradict this repository and/or may contain inaccurate information. Please note that each referenced site is responsible for their own material.

To unmistakably identify the uncertain birthplaces of people born in France (mainly in Alsace/Lorraine), we consulted the departmental archives online to find the trace of their birth in the civil records and decennial tables. In these cases too, links to the websites of the Departmental Archives were added.

The critical comparison of these different data has made it possible to precisely identify the many birthplaces of the deportees, which until then have remained indecipherable. For 93% of deportees, there is now a precise estimate of their place of birth. For the remaining 7% were born in 3,900 locality names are still not identified (out of 15,000 distinct place names in the 2012 Memorial) but they account for 2% of the persons. In a few hundred cases, this study also made it possible to propose additions and corrections of errors in the surnames, first names and maiden names of the persons named in the Memorial.

By giving everyone the name of the city or village of their birth, this tool hopefully helps to enrich and clarify a little more the identity of the victims and their journey. For genealogists, this is the key to any search for ancestors upstream and other branches of the family.

This study shed new light on the distribution of deportees according to their place of birth. It is striking to find out the extreme diversity of this population born among 6,400 towns and villages across 74 countries (in 2019 borders), mostly in now vanished Jewish communities in Europe and around the Mediterranean basin. The distribution of the birth places can be seen here.

However, we did not systematically correct the first and last names when the differences are minor and they do not affect the phonetic search or when translating to French: for example, an entry for a person named Maurice Loeb in the 2012 Memorial and Moritz Löb in the Gedenkbuch may remain unchanged.

When the information from the various sources diverges totally, we left the information of each source. The birth dates in different sources often differ by a year or two, perhaps reflecting the strategy of the persecuted Jews to declare themselves younger or older, depending on the case, to increase their chances of survival.

The 1978 version of the Memorial specifies the nationality of a large number of the deportees until June 1943 and indicates who were the known survivors in 1945. These data being excluded from the 2012 version, they are currently only partial and we will complete them in the future.

According to the practices used in genealogy, this tool uses the current names of each locality, as they are used locally, including their accents, cedillas and other diacritics (e.g. Łódź, Ivano-Frankivsk, Chişinău, Bucureşti). However, we have indicated the ancient names of these localities when they appeared on the sources (e.g. Stanisławów for Ivano-Frankivsk in Ukraine, Kishinev for Chişinău in Moldova). For non-Latin alphabets (i.e. Greek, Arabic, Russian, Belarussian, Bulgarian, Serbian, Macedonian, Hebrew), we use the transliteration of these places to the Latin alphabet as found on the English versions of Google Maps or Wikipedia (e.g. Thessaloniki for Θεσσαλονίκη). Country names are in English (e.g. Hungary, Germany). The names of the provinces and administrative subdivisions of each country are usually in the local language with accents and diacritics signs: for example, the Rhine-Palatinate land in Germany is indicated as Rheinland-Pfalz, the French departments are noted with their accents (e.g. Ariège, not Ariege), the Holy Cross Province (voivodeship) in Poland is noted Świętokrzyskie.

Despite the utmost attention given to this study, some choices may prove to be wrong, some errors may have occurred. I am the one and only responsible for them. Contact me here for any additions or corrections.

Many publications by Beate and Serge Klarsfeld (books, magazines, stories) are now available online in english and in french here.

First and foremost, I am truly grateful to Serge and Beate Klarsfeld for the immediate trust they gave me. As soon as I presented the project, they supported it and encouraged me. They shared the digital data of the 2012 Memorial and authorized to make the data and the 2012 introduction public on the Internet. I hope I did not distort their life-time achievement in this version.

I am particularly indebted to Steve Morse for his logistical support around the One-Step tool, and for hosting the search engine on his website. Without the One-Step tool available, I would probably not have started this project.

I submitted a few questions and working assumptions to Alexander Beider, who kindly replied with his encyclopedic knowledge.

I thank Eve Line Blum-Cherchevsky (z"l), Chantal Dossin and Georges Mayer who helped me to resolve questions about the deportees of convoys 73, 76 and 77 respectively. Eve Line, stressing the importance of officially declaring victims as "died in deportation" by the French Ministry of Defense (War Veterans Affairs), enlightened me as to what could be expected from the lists published in the Journal Officiel. Thanks to Nicolas Coiffait who shared with me the material he indexed from the archives of Hopital Rothschild.

The German Federal Archives (BundesArchiv in Berlin) were kind enough to share their information on the German Jews who were in France during the war.

Jackie Schwarz applied her remarkable skills to fill gaps about Jews who came from Antwerpen or Belgium.

My friends Jacqueline Weisz, a member of the Sons and Daughters of the Jewish deportees from France association and Philippe Boukara, historian at the Mémorial de la Shoah in Paris, provided me with useful advices and feedback on this project.

Finally, I wish to thank my spouse Isabelle, who supported me by her smart remarks and infinite patience.